PARAMAHANSAJI: (excerpts) I wanted to make a pilgrimage to Bavaria. This would be my only chance, I felt, to visit the great Catholic mystic, Therese Neumann of Konnersreuth.

Years earlier I had read an amazing account of Therese. … Therese…was injured in an accident at the age of twenty; she became blind and paralyzed. She miraculously regained her sight in 1923 through prayers to St. Thérèse of Lisieux, “The Little Flower.” Later Therese Neumann’s limbs were instantaneously healed. From 1923 onward, Therese has abstained completely from food and drink, except for the daily swallowing of one small consecrated wafer. The stigmata, sacred wounds of Christ, appeared in 1926 on Therese’s head, breast, hands, and feet. Every Friday she experiences the Passion of Christ, suffering in her own body all his historic agonies. ….

THERESE: “Though the bishop has asked me to see no one without his permission, I will receive the man of God from India.”

Deeply touched at these words, I followed Dr. Wutz upstairs to the sitting room. Therese entered immediately, radiating an aura of peace and joy. She wore a black gown and spotless white headdress. Although her age was thirty-seven at this time, she seemed much younger; possessing indeed a childlike freshness and charm. Healthy, well-formed, rosy-cheeked, and cheerful… 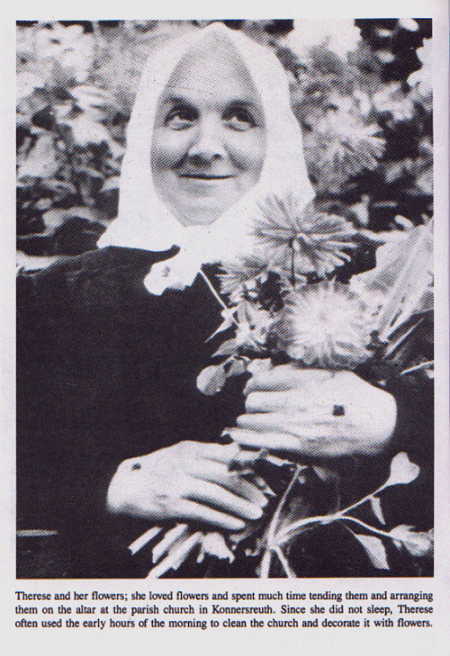 We beamed in silent communion, each knowing the other to be a lover of God. …“Don’t you eat anything?” ….

How simple her reply, how Einsteinian!

“I see you realize that energy flows to your body from the ether, sun, and air.”

A swift smile broke over her face. “I am so happy to know you understand how I live.” ….

As my gaze fell on her strong, graceful hands, Therese showed me a square, freshly healed wound on the back of each hand. …

The saint told me something of her weekly trances. “As a helpless onlooker, I observe the whole Passion of Christ.” Each week, from Thursday midnight until Friday afternoon at one o’clock, her wounds open and bleed; she loses ten pounds of her ordinary 121-pound weight. Suffering intensely in her sympathetic love, Therese yet looks forward joyously to these weekly visions of her Lord.

I realized at once that her strange life is intended by God to reassure all Christians of the historical authenticity of Jesus’ life and crucifixion as recorded in the New Testament, and to display dramatically the ever living bond between the Galilean Master and his devotees. ….

Her brother Ferdinand…explained that Therese has the power, through prayer, of working out on her own body the ailments of others. 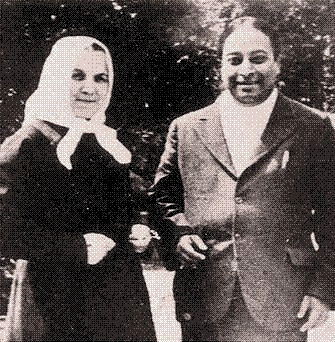 BRO. BHAKTANANDA: There’s a wonderful illustration, a wonderful example in the life of THERESE NEUMANN that Master writes about in the Autobiography of a Yogi. At the age of twenty she was in an accident, her body was paralyzed from the neck down. She lost her sight and she was lying in bed all the time. Did she bemoan her fate that she was not like other girls, wearing beautiful dresses, going to parties and dances, having boyfriends? Certainly not. She placed her mind on God, and her heart on God.

She prayed to God, she prayed to Christ, she prayed to SAINT THERESE [OF LISIEUX], day after day. She was in ecstasy in a short time For five years she was in this state. Then God healed her body, and her sight returned. And so she prayed constantly. This we have to realize. And this is a great example, practicing the presence of God, utilizing our time properly, in the highest way, the best way possible. Suppose she cried about her misfotune, supposed she pitied herself, and felt hopeless and frustrated. What would she have? She’d still have a paralyzed body and blindness to the end of her life. But she was wise. She spent her time praying to God, Christ and St. Therese. And that is what we have to learn from people like that. That is how they become saints. And Therese Neumann was a saint, lived for about forty years more and inspired many people to seek God.

“The Importance of a True Guru,” Bro. Anandamoy CD/download, excerpt

BRO. ANANDAMOY: When you read, for instance, the story of THERESE NEUMANN in the Autobiography of a Yogi, who had the stigmata…very few people really understood. Most people just are seeing she had the stigmata, it’s an outer manifestation, it’s extraordinary, and forget the deeper meaning of that. The deeper meaning is that the person has to be SO in tune with his Guru, such Oneness. And this is an outer sign that God permitted in that particular case to show. This is the UTTER attunement so that even outer signs manifest in the body…God is teachings lessons sometimes in such a way.

AUTOBIOGRAPHY OF A YOGI – QUOTES

AUTOBIOGRAPHY OF A YOGI -YSite Articles