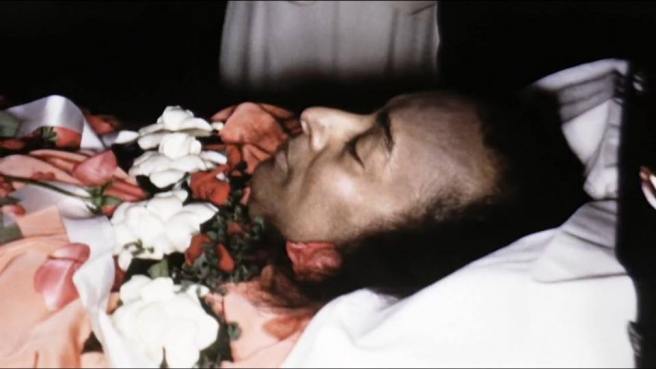 The body of the blessed master, Paramhansa Yogananda, as it lay on his bed three days after his passing.  The “phenomenal state of immutability” that manifested itself at his death appears to be God’s dramatic way of calling mankind’s attention to the soul revealing science of yoga.

“Yoga and the Miracle of Incorruption” ~ Sister Lauru, May 1952 SRF magazine

The body of Paramhansa Yogananda, who died on March 7, 1952, remained “in a phenomenal state of immutability.”  Mr. Harry T. Rowe, Mortuary Director of Forest Lawn Memorial-Park Association, tells “the whole amazing story” in a notarized three-page letter that is reproduced in full in this issue of Self-Realization Magazine.  Extracts from the letter follow:

“The absence of any visual signs of decay in the dead body of Paramhansa Yogananda offers the most extraordinary case in our experience …. No physical disintegration was visible in Yogananda’s body even twenty days after death.  The body was under daily observation at the Mortuary … from March 11, 1952, the day of the last public rites, until March 27, 1952, when the bronze casket was sealed by fire.  During this period no indication of mold was visible on Yogananda’s skin, and no visible desiccation (drying up) took place in the bodily tissues.  This state of perfect preservation of a body is, so far as we know from mortuary annals, an unparalleled one.

” …. When ptomaine acids become active, deterioration of tissues is rapid.  Yogananda’s body was apparently devoid of any impurities by which muscle proteins could be resolved into ptomaine acids.   His tissues remained intact.

“At the time of receiving Yogananda’s body, the Mortuary personnel at Forest Lawn expected to observe, through the glass lid of the casket, the usual progressive signs of bodily decay.  Our astonishment increased as day followed day without bringing any visible change in the body under observation.   Yogananda’s body was apparently in a phenomenal state of immutability.

” …. The hands at all times remained normal in size, revealing no signs of shriveling or pinching at the fingertips—the place where desiccation is ordinarily seen very early.  The lips, which wore a slight smile, continuously retained their firmness.   No odor of decay emanated from Yogananda’s body at any time.

“…. The physical appearance of Yogananda on March 27th, just before the bronze cover of the casket was put into position, was the same as it had been on March 7th.  He looked on March 27th as fresh and as unravaged by decay as he had looked on the night of his death.

“On March 27th there was no reason to say that his body had suffered any visible physical disintegration at all.  For these reasons we state again that the case of Paramhansa Yogananda is unique in our experience.

“On May 11, 1952, during a telephone conversation between an officer of Forest Lawn and an officer of Self-Realization Fellowship, the whole amazing story was brought out for the first time.  Previously the Fellowship officer had not known the details, as he had not been in touch with the Mortuary Director but only with the Administrative Department of Forest Lawn.   In the interests of truth, we are glad to present this written account for publication in Self-Realization Magazine.”

Paramhansa Yogananda’s body is now in a crypt in the “Sanctuary of Golden Slumber” in Holly Terrace of the Great Mausoleum of Forest Lawn Memorial-Park Association at Glendale.  His casket will remain there until arrangements can be made for its permanent enshrinement on the twenty-five-acre grounds of the SRF headquarters on Mt. Washington near the Highland Park district of Los Angeles.

“Yoga and the Miracle of Incorruption” ~ Sister Lauru, May 1952 SRF magazine

GO BACK  MONASTIC STORIES of the Gurus and Monastics